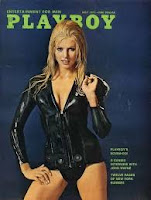 Bastante citada nos dias atuais a desastrada entrevista do ator John Wayne para a Playboy de maio de 1971.
PLAYBOY: Angela Davis claims that those who would revoke her teaching credentials on ideological grounds are actually discriminating against her because she's black. Do you think there's any truth in that?
WAYNE: With a lot of blacks, there's quite a bit of resentment along with their dissent, and possibly rightfully so. But we can't all of a sudden get down on our knees and turn everything over to the leadership of the blacks. I believe in white supremacy until the blacks are educated to a point of responsibility. I don't believe in giving authority and positions of leadership and judgment to irresponsible people.
PLAYBOY: Are you equipped to judge which blacks are irresponsible and which of their leaders inexperienced?
WAYNE: It's not my judgment. The academic community has developed certain tests that determine whether the blacks are sufficiently equipped scholastically. But some blacks have tried to force the issue and enter college when they haven't passed the tests and don't have the requisite background.
Viver é Perigoso
Postado por Edson Riera às segunda-feira, setembro 21, 2020